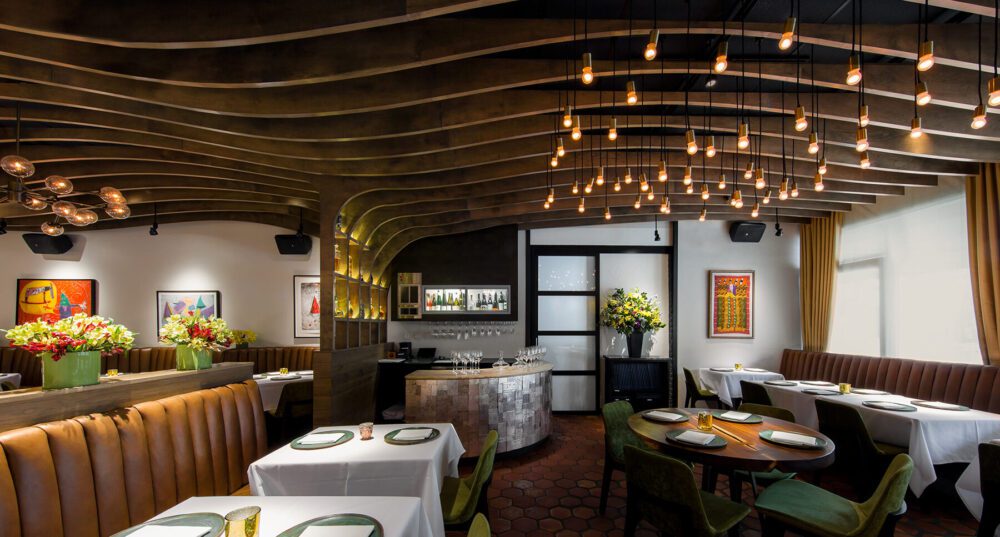 Rick Bayless and his team approached Aria Group in the summer of 2016 with a small ceiling remodel of Topolobampo, a fine dining restaurant operating in Chicago’s River North neighborhood since 1989. The original scope of the project morphed into an extensive refresh of the space. In May 2017, Topolobampo won the James Beard Award for Outstanding Restaurant.

The existing restaurant could almost be seen as two separate spaces.  There was a front dining room along Clark Street and a back dining room off the kitchen, divided by open shelving that extended to the ceiling. At our initial site walk through, it was clear that the ceiling elements were nearing the end of their life cycle. We submitted a proposal to clean up the ceiling and lighting and waited for a response. Months passed, and we thought we had missed out on our chance to work with one of Chicago’s best chefs. In October Frontera called us in for a meeting and the scope had changed from a simple ceiling project to one that would touch the entire front of house. The challenge was that we had less than two months to design, bid & build-out the space. 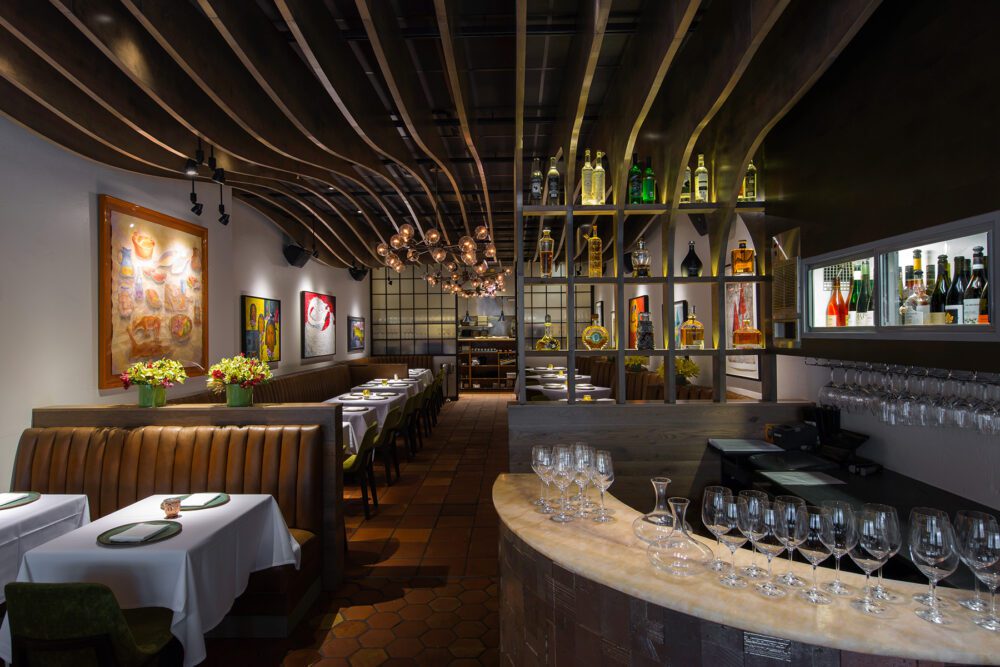 The food at Topolobampo is complex and unique.  The New York Times called it “Possibly the most elegant and serious Mexican restaurant in the country.” Each season brings a new tasting menu organized around a unifying concept.  Aria Group’s challenge was to elevate the space to align with the amazing food being served in the dining room. We sought to create a space that was sumptuous, elegant, and wondrous – that extends the energy created in the kitchen into the dining room. 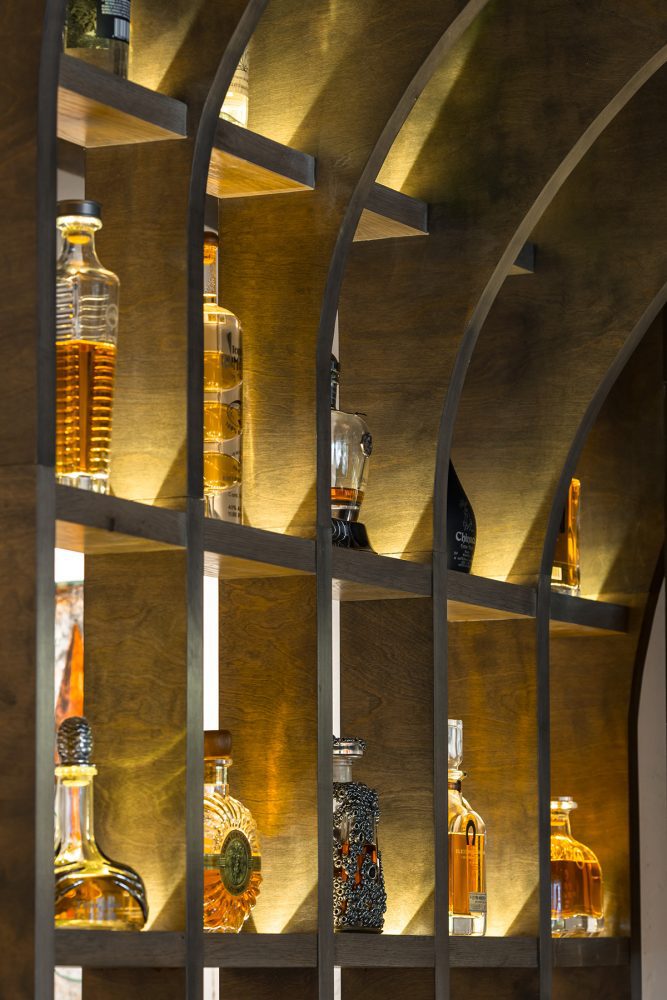 Wood ﬁns, fabricated by Woodmsith in Ohio, ﬂow out of the kitchen and pull energy through the dining room.  They connect the two spaces in the restaurant and add emphasis to the bar adjacent to the entry. There the ﬁns turn down and frame a mezcal and tequila display. This provides a glowing backdrop to the bar, which is clad with a unique pewter tile by Ann Sacks.

As you enter into the space, a cloud of lighting ﬂoats above a beautiful walnut slab table, built by Von Dreele-Freerksen, creating an attention-grabbing feature element.  The white plaster walls create a gallery backdrop for the amazing collection of original Mexican art curated by the Bayless’s.  The colors within the space are kept subtle, to keep the focus on the vivid colors within the art and the food.  The banquettes have been updated with the luxurious addition of tufted leather and a touch of olive green velvet on the dining chairs. Particular care was taken to provide an intimate feeling at each table with lighting and acoustics of the space.  The focus is on the food, but yet the music, the art, and the lighting all add to the experience.

The project was a very quick process from start to ﬁnish — with design starting in October of 2016 and construction completing in the 2nd week of January 2017.  Construction on site was completed in only 9 days.  From start to ﬁnish, the team from Aria, Woodsmith & Kern Konstruction worked together to streamline the design and complete the project in this short time period. 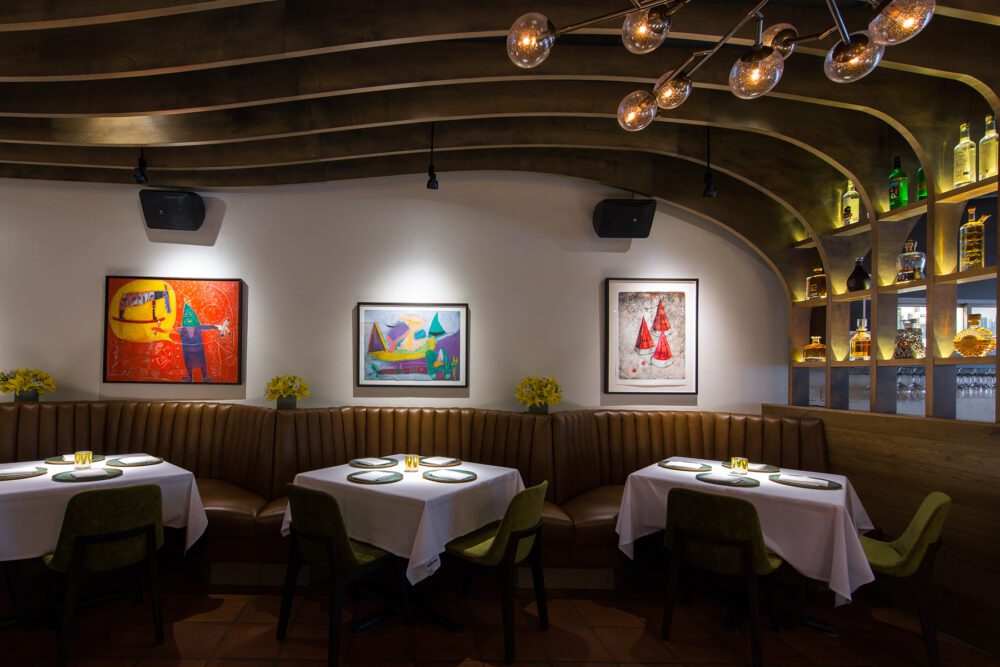 As a nice postscript, on May 1st 2017, Topolobampo took home the James Beard Award for Outstanding Restaurant, the highest honor bestowed by the organization. Prior to the ceremony, Rick told us that he thought that our work there would be a contributing factor if the restaurant won the award. We are just glad to have had a small part in the ongoing story of a Chicago institution.

We are full of gratitude as we enter this holiday season and we are thankful for every client—past and present! One of our clients, Cocina Compartida de Trabajadores Cooperativistas (CCTC), has been working for over three years to realize their dream of opening a shared kitchen space for street vendors to prepare food in Chicago’s […]