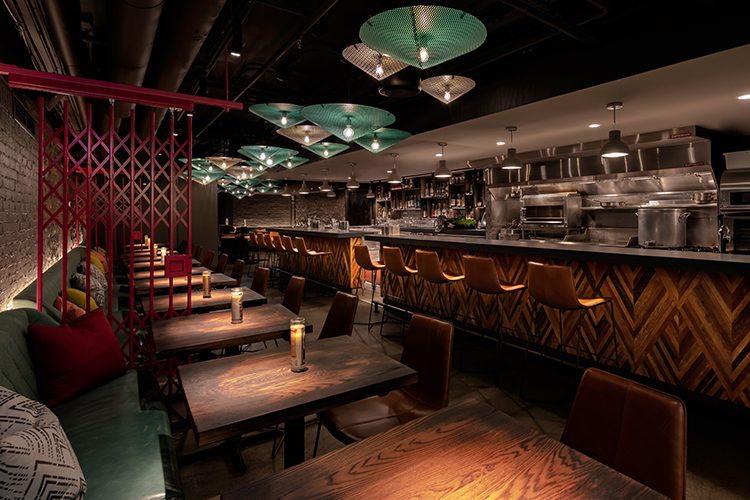 The design challenge: A Oaxacan-inspired speakeasy

Rick and Lanie Bayless and the team at Frontera Restaurant Group asked us to reinvent the basement space below Frontera Grill.  They envisioned a Oaxacan-inspired speakeasy with small plates, mezcal forward cocktails, and youthful vivacity. Aria was tasked with emulating the mezcal-making process in the built environment. Therefore we drew inspiration from the rich history of mezcal.

The charred wood tables represent the smoky taste of mezcal, as does the gradient glow along the stone foundation walls. The diamond pattern created by cutting the leaves off of the agave “pina” before roasting is another major theme. This pattern is visible on items such as the custom laser cut metal panels enclosing the stairs. Other instances include the bar die wall that is clad in reclaimed wood lath, as well as the hot pink elevator gate dividers.  Juan de la Mora’s painted mural was also inspired by the mezcal making process and the artist’s time as an apprentice in Mexico. 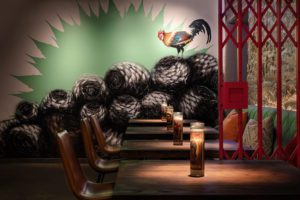 With a focus on authenticity, we incorporated other Mexican-inspired touches. For example,  paper lanterns used as decoration in a Mexican celebration inspired the decorative lighting. Likewise, back bar shelving mimics stacked crates holding mezcals and tequilas. Overall the color palette draws on hues seen throughout modern Mexican architecture.

Bar Sotano is located in a basement with low ceilings, which required an intricate HVAC system that fit the existing space. We created a functional and comfortable space with the aid of consultants Advance Consulting Group, C.E. Anderson & Associates, and ADE Restaurant Services Inc. Kern Konstruction implemented the design taking into account the height constraints and other site-specific concerns. Teamwork between architect, consultants, and contractor resulted in an intimate speakeasy environment.

After opening in November of 2018 Bar Sotano appeared on Eater’s “Chicago Bar Heatmap; Where to Drink Right Now” for several consecutive months. It also graced media sites and publications such as the Chicago Tribune, (earning the Best New Cocktail Bar Award), Chicago Magazine, abc7 and more. We’re thrilled and excited for the Frontera team with the rapid success and great reviews that Bar Sotano has received. As with all projects we’ve completed with the Frontera Restaurant Group, we’ve enjoyed the challenge of emulating the visceral reactions Bayless and his team hope to entice with their cuisine. Collaborating with the Frontera team — true culinary artists — continues to be an inspiring process.

For this edition of Meet the Team, we would like to introduce Daliah Zarour!  Daliah has been with Aria for a year and we are lucky to have such a talented and experienced hospitality designer on our team. Daliah got right into the mix and has helped out with some really fun projects such as […]